The economy added 263,00 jobs in November. Expectations were for 200,000, so we exceeded them. But the labor force dropped another 186,000. That is bad, considering we have 4.3 million more job openings than workers to fill them.

Why it matters: We are now 102,000 workers below the pre-pandemic participation level. The labor force has shrunk for three straight months.

Be smart: Further complicating the strong topline jobs numbers is that the household survey showed the number of workers employed dropped by 138,000. Usually, the surveys of businesses (the 263,000 figure) and households are similar. No one is sure what to make of the surveys pointing in different directions. It is something to keep an eye on.

Bottom line: The continuing strength of the labor market and wages is a Catch-22 for the Fed. Large wage gains as we are seeing are a sign that inflation remains high. It could mean continued interest rate hikes, which is why the financial markets reacted badly to what was mostly an encouraging jobs report. 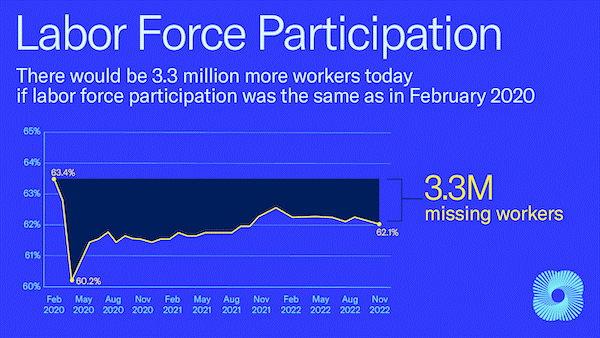