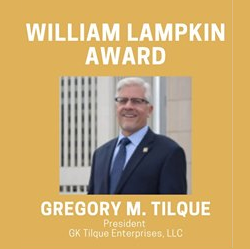 The prestigious EDDE Awards honor individuals and companies that have made significant contributions to the advancement of the organization and to economic growth within the state of Arizona. Recipients were selected from a pool of nominations made by members of AAED.

The William Lampkin Award for Long Term Excellence in Economic Development, presented by the Pat Davis Design Group, Inc., was given to Greg Tilque, CEcD, whose career and significant contributions to economic development in Gilbert and the Valley span more than 30 years, while Jennifer Graves, CEcD, deputy economic development director for the town of Gilbert, was named Economic Developer of the Year – Large Community, presented by Sigma Contracting.

Among his accomplishments are helping to establish both the Gilbert Heritage District and the Gilbert Sister Cities program He also played an instrumental role in the recruiting of many of Gilbert’s major employers, including Spectrum Astro, Northrop Grumman, Lockheed Martin, EchoStar Corporation and the San Tan Motorplex, to name a few.

Among some of the top projects that Graves has played a role in over the last 12 months are:

Overall, 10 EDDEs were presented during a virtual awards ceremony at the AAED Fall Forum. The other winners are:

“The EDDEs showcase the best in economic development for all of Arizona,” said Carrie Kelly, AAED’s executive director. “Without the work of these individuals and organizations, the economic vitality we see across the state would be nowhere near the high level that we see today. They truly have a role in the growth of their individual communities and we are pleased to recognize them and their accomplishments.”

AAED, founded in 1974, has a mission to serve as Arizona’s unified voice advocating for responsible economic development through an effective program of professional education, public policy and collaboration. For more information on AAED, visit www.aaed.com or call (602) 240-2233.