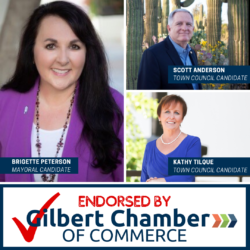 “Mayoral candidate Brigette Peterson earned a 96 percent and Vice Mayor Scott Anderson an 88 percent favorable voting record with regard to Chamber priorities,” said Matt Streeper, Chairman of the Board. “Kathy Tilque has led the Chamber’s advocacy efforts for the past 24 years and has contributed significantly not only to the pro-business environment Gilbert enjoys but also to quality community development efforts. These candidates will provide much needed expertise from their years of experience.”

According to Streeper, the Chamber’s Board and membership feels that strong leadership and understanding of the overall vision for the Town is extremely important given the significant turnover of Town Council members this election cycle.

All candidates who submitted a statement of interest prior to February 3rd were invited to participate in the Chamber’s endorsement process, which includes a written response to a formal questionnaire and a personal interview. The process is managed by volunteers of the Chamber’s Public Policy committee, who review and score both the questionnaire and interview for each candidate.

The endorsements of Anderson and Tilque were announced in a statement on March 9th as both candidates met the criteria for and were awarded the Chamber’s early endorsement. Former Councilmember Brigette Peterson was not eligible for consideration of an early endorsement due to the Chamber’s policy which states incumbents must be running for the same office for which they are currently elected.

Volunteers of the Gilbert Chamber are conducting the endorsement process for candidates running for the offices of Districts 12 and 17, County Supervisor, and Congressional District 5. Their recommendations will be submitted to the Chamber’s Board of Directors for final review and approval prior to being announced.